Writings
Next
Previous
As a child, my parents brought us to Folly Cove, Gloucester, on many summer Sundays. My earliest memories of the place go back to less than the age of five. Now that we live nearby, we often stop there. One day I noticed that there was a large amount of Purple Loosestrife where we would play as children. This is an acrylic painting that shows the view of Folly Point with the flowers in the foreground. I had first done a version in oil which Matt wanted. Ria also wanted it, so I did the acrylic version for her. The acrylics work well with this painting since they make the colors more vibrant.

The Hopperesque painting above is of the skeleton of the Pigeon Cove forge that has been out of business for many years. As you approach Rockport and the old forge buildings loom into view, it is very reminiscent of the subject of a painting that Edward Hopper might have done. So, I did my version in oil. For years developers have been trying to use the property for a marina or hotel, but misguided environmentalists, much to the dismay of the people of Rockport, have been successful in blocking the proposed projects. So it still stands there, even more run down now than shown here. 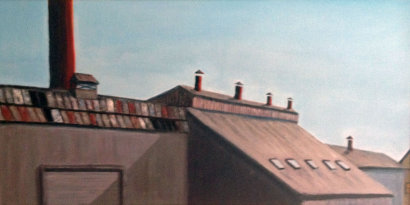